We have long been accustomed to think that power comes only through Legislative Assemblies. I have regarded this belief as a grave error brought about by inertia or hypnotism.
A superficial study of British history has made us think that all power percolates to the people from parliaments. The truth is that power resides in the people and it is entrusted for the time being to those whom they may choose as their
representatives. Parliaments have no power or even existence independently  of the people. It has been my effort for the last twenty-one years to convince the people of this simple truth. Civil Disobedience is the storehouse of power.
Imagine a whole people unwilling to conform to the laws of the legislature, and prepared to suffer the consequences of non-compfiance! They will bring the whole legislative and executive machinery to a standstill. The police and . the military are of use to coerce minorities however powerful they may be. But no police or military coercion can bend the resolute will of a people who are out for suffering to the uttermost.
Posted by अफ़लातून at 10:36 am No comments: Links to this post

The basis of calculation has changed. As per pre-2014 calculation it is around 2.5%. Extremely scary. 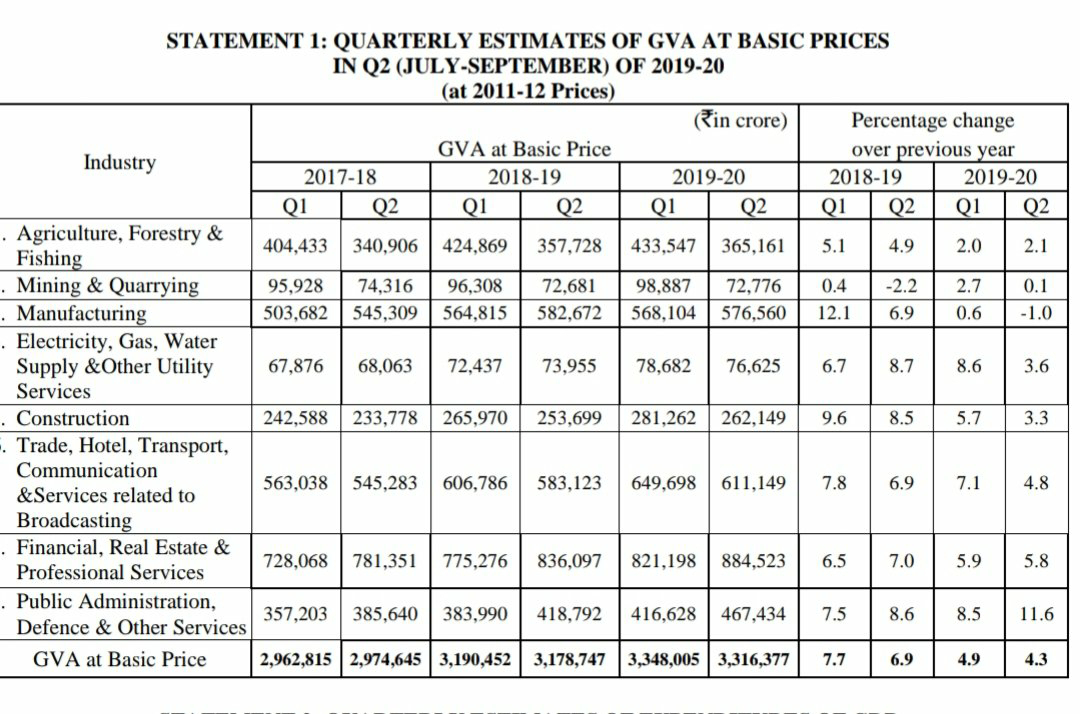 Posted by अफ़लातून at 6:26 am No comments: Links to this post

Posted by अफ़लातून at 8:41 am No comments: Links to this post

Hitlerism in GermanyHow Long Will It Go On? By Ram Manohar Lohia, Ph.D (Berlin)

(Mr. Lohia has just returned from Germany after a stay of four year», during which he took- a course in political economy, history and philosophy in the University of Berlin. his thesis for the. Doctrate Degree of Philosophy, which he eventually took with honours was "The Taxation of Salt in India," dealing with its historical as well as it its financial and political importance. In Berlin he was for sometime the Secretary of the "Hindustan Association of Central Europe) 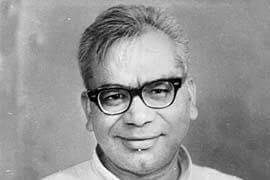 On 15th October Raigad  police arrested leading member of Niyamgiri Suraksha Samity - Sathi  Dhadi Kadraka from Muniguda and brutally assaulted him. To lodge protest against such undemocratic and unruly act of your police,  National Vice- President of Samajwadi  Jan Parisad Satihi  Lingraj Azad has convened a peaceful demonstration on 23rdOctober at Raigard.  But Police  constantly putting pressure upon Satihi  Lingraj Azad to postpone the programme  on 23rd October. Even S.P of the  neighbouring district  Kalahandi  called Satihi  Lingraj Azad at PS and put pressure on him to  postpone 23rd October program. These kind of arm twisting act of your police administration is not only undemocratic, abuse of power but also violates the fundamental right of assembly and freedom of expression.

You are aware that Niyamgirii Suraksha Samity  has all along  organised various kinds of movements in a peaceful democratic manner to protect interest of the Adibasi community of Nyamgiri Hills from the attempt of the  Vedanta Company  to take over Nyamgiri hills for boxite mining.

You may recall that by the order of the Hon’ble Supreme Court  opinion of the Adibasi inhabitants was taken. At that time despite all kinds of harassment, allurement and fear let lose by the Vedanta Company with the active aid of the state and central govt. and also ignoring the call of the Maoist to boycott opinion poll not a single vote was given in favour of Vedanta Company.

It seems that Vendata Company again appears in the scene and Orissa police is acting at the behest of the Vedanta Company to destroy the peaceful democratic struggle of the innocent Adibasi of Nyamgiri Hills to save their life, livelihood  and environment in and around the Niyamgiri Hills from the clutch of the ill famed Vedanta Company.

We strongly condemn such illegal act of your  police appeal to you to restrain the Raygard Police from creating any obstruction for holding peaceful demonstration of Nyamgiri Surksha Samity to be held on 23rd. October.

Posted by अफ़लातून at 7:28 pm No comments: Links to this post

Posted by अफ़लातून at 11:43 am No comments: Links to this post

A.G. NOORANI warns us of being “unsafe and unhistorical to cite the Gandhian precedent before independence” (“Gandhi's no to satyagraha”, August 26). Noorani has tried to establish that both Gandhiji and B.R. Ambedkar were against satyagraha in the post-Independence era. Gandhiji was perhaps more conscious of the dangers of being misunderstood and misrepresented by his readers and others. Books of his original writings carry a note “To The Reader” originally written by him in his journal ( Harijan, 29-4-1933, page 2). It says: “ I am not at all concerned with appearing to be consistent…. When anybody finds any inconsistency between any two writings of mine, if he has still faith in my sanity, he would do well to choose the later of the two on the same subject.”

To be “safe” and “historical”, I would like to start from Gandhi's martyrdom so that nothing remains later than that. Gandhi gave Pyarelalji a new draft Constitution for the Congress that he had prepared the previous day. “The struggle for the ascendancy of civil over military power is bound to take place in India's progress towards its democratic goal.” The draft contained this prediction. We can easily imagine the nature of the struggle that Gandhi had imagined. It would have been fought through peaceful and pure means. Gandhiji observed a fast (a mode of satyagraha) on Independence Day. He was asked whether he would leave politics after August 15, 1947. Gandhiji replied, “In the first instance there is no freedom approaching the Kingdom of God. We seem to be as far from it as ever. And in any case the life of the millions is my politics from which I dare not free myself without denying my life work and God. That my politics may take a different turn is quite possible. But that will be determined by circumstances ( Harijan, 17-8-1947, page 281).

His last two post-Independence fasts, in Kolkata and Delhi respectively, were in the wake of communal violence after Partition. Jawaharlal Nehru and Vallabhbhai Patel were in the saddle of power. Noorani is known for his writings on communalism and should not deny Gandhiji's contribution through these two fasts and ultimately by his utmost sacrifice. Gandhiji's speeches and writings on satyagraha have been sanctified by his righteous practice and suffering the consequences of breaking unjust laws. Moreover, they are written for all time. His incisive logic is unanswerable.

Gandhiji has made it amply clear that he believed in the supremacy of the people. In his famous booklet “Constructive Programme: Its meaning and place”, he elaborated his vision in clear terms: “The truth is that power resides in the people and it is entrusted for the time being to those whom they may choose as their representatives. Parliaments have no power or even existence independently of the people. Civil Disobedience is the storehouse of power.”

Ambedkar delineated how fundamental rights can be effective. He said: “Rights are protected not by law but by the social and moral conscience of society.” The social and moral conscience of the Indian people protected these fundamental rights when they got an opportunity to choose between democracy and dictatorship in the 1977 general elections. In spite of all the infighting in the Janata Party, its government should be remembered for the historical amendment it made to the Constitution to make “internal emergency” next to impossible.

The right to undertake civil disobedience, or satyagraha, in any parliamentary democracy by a citizen is a fundamental right. To criticise this right is to negate the basic democratic system.

Posted by अफ़लातून at 11:11 am No comments: Links to this post

Further, it violates the right to privacy which is now recognized as an essential part of life and personal liberty. The Supreme Court of the country has also upheld the same in its landmark judgment which says that ‘Privacy’ is a fundamental right of every individual. By compelling the citizens to surrender the core biometric information, it has violated all three principal aspects of privacy viz. Privacy of Person, Privacy of information and Privacy of choice. Moreover, the said provision has been enacted without legislative competence rendering it void ab initio, being ultra vires in nature as being a subordinate legislation, it could not have changed the otherwise consensual scheme of Aadhaar Act into a mandatory scheme thereby overturning the entire legislative policy of Aadhaar. The provision has also exceeded the mandate of its parent sections under the PMLA Act by mandating ceasing of operation of non – Aadhaar holders’ bank accounts. This is not the end; the provision also violates the Article 14 of the Constitution of India as forcing every individual to surrender his core biometrics unfairly equates him to a criminal. Ceasing operations of legitimate accounts also unfairly equates legitimate funds to crime proceeds which are to be attached under the PMLA Act. To worsen the situation further, linking of Aadhaar and Bank accounts defeats the object of the PMLA Act itself as it allows real money launderers to launder crime proceeds by executing identity thefts. Such thefts are highly probable considering the nature of information and its storage.
Thus, making Aadhar compulsory is illegal and would virtually convert the citizens into "slaves" as they would be under the government's surveillance all the time; apart from violating the citizens' fundamental rights granted under the Constitution as they would be coerced to give sample of their fingerprints and iris.
The All India Bank Officers Confederation, the largest officers' organization having membership of around 325000 officers is in opposition to the move of the Govt. for making Aadhar Card mandatory to citizens rather than being voluntary. When the matter is subjudice in the  supreme court, the urgency of the Govt. in its implementation is uncalled for and against the true spirit of democracy. Taking all these factors into consideration, the undersigned along with Mr. M.G. Devasahayam, retired IAS and Mr. Samuel Rajappa, Former Resident Editor, The Statesman have filed a Public Interest Litigation (PIL) against the Union of India and Unique Identification Authority of India in the Hon’ble Supreme Court of India. We sincerely believe and are quite hopeful that with the good wishes of all the people, we will be successful to thwart the ill-motivated steps of the Govt. of India and the Hon’ble Supreme Court would uphold the spirit of the fundamental rights of our compatriots and we will not have to remain as the slaves to the Govt. by virtue of mandatory aadhar for all.
(D. T. Franco)
General Secretary
9445000806
ngcfranco@gmail.com

Posted by अफ़लातून at 6:20 am No comments: Links to this post 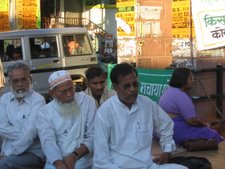